The mini refit behind us, it was time for Jonty and I to take Spellbinder on the next stage of her travels – down to the south-west Atlantic coast of France. We had a steady start, anchoring in Newtown Creek on the Isle of Wight for the night before taking the tide across the Channel to Guernsey, where we anchored behind the Castle in Havelet Bay (so much less faff than going into the marina) and picked up some more fuel, at a most amenable price, from the fuel pontoon in St Peter Port. The crossing had been the first proper outing for the new cruising chute, which has been a joy to use; it is cut a bit higher, improving visibility and performance on a close reach.

After Guernsey we had a quiet sail over to Roscoff, where we checked in with the authorities (a European electronic visa system needs to come soon, as it will make life so much easier for British yachtsmen) and picked up Belle, who had come over on the ferry from Plymouth, and who was to accompany us for the next week or so. We strolled around Roscoff, and had a fine lunch, listening to the local Breton singers.

We left on the tide, aiming to head west towards the tip of north-west France. We negotiated the narrow channel between Roscoff and the Ile de Batz before heading out along the coast. Belle had a bit of a severe introduction to yachting, as we found ourselves motor sailing into quite a swell and it was all quite a roller coaster of a ride. She remained very stoic though, and a few hours later we arrived in L’Aber Wrac’h, a river well known to British yachtsmen as it is a useful staging post. We picked up a buoy to recover and waited a day or so to let the swell die down, before heading round to another river, L’Aber Benoît, for the night.

It was a dawn start the next day to head down through the notorious Chenal du Four and Raz de Sein – notorious in the sense that in poor conditions, or when tides are misjudged, they can be very dangerous. The weather had abated though, and we had a relatively easy passage through, even stopping for a couple of hours to have lunch at anchor off the Ile de Sein, a beautiful island which I had not had time to visit on previous trips.

Once through the Raz de Sein we made for Audierne, where getting to the marina involves heading up a fairly narrow river which is subject to the tides and can present a challenge depth-wise. Once in, however, you are right in the centre of town, where there is an excellent poissonerie and patisserie adjacent to each other all of 50 yards from your berth. We took advantage of both.

The following morning we headed round the Pointe de Penmarc’h, south of which it always seems to me that southern Brittany starts, and better weather begins. After passing the Pointe, we benefited from lovely northerly winds, propelling us gently down the French coast, all the way to the Gironde, much of it under cruising chute.

Our initial destination was Port La Forêt, where Sue arrived from Paris by train. It was lovely to meet up with old friends Yves and Claire, who helped by picking Sue up from the station and by treating us to a fine dinner at their house.

The following morning we left early while we still had tide, anchoring off in the bay before heading to Port Manec’h, another place I had not been to. We explored the Belon River (known for its peculiar oysters and restaurant ‘Chez Jacky’) before anchoring off Manec’h, strolling along the coast and meeting up with friends Peter and Janet in their very similar Hallberg Rassy.

The next morning we had another rendezvous with yacht-owning friends, this time off Doëlan, where Jeremy and Debbie rafted alongside us for an enjoyable lunch. Their new Amel 50 Swyn y Mor is superb, and they have equipped and prepared her beautifully for what they hope is a circumnavigation. As I write this they are well on their way from Brest to Madeira.

After Doëlan we went island hopping – Houat, Ile d’Yeu and Ile de Ré. They are all lovely in their own way. Houat has a lovely beach to anchor off, and is small and accessible to walk around. We met up with RCC friends David and Jill, and Peter and Sandy, who were anchored near us. Yeu is a bit bigger than Houat, but can be easily cycled around in a day. It is wild in places, with lovely beaches and forests. We went into Port Joinville for a couple of nights, meeting more RCC friends William and Susannah on their Hylas 46 Hero, and we biked and walked, spending a final night at anchor off the beach at Anse des Vieilles on the south side. At Yeu we said goodbye to Belle and Jonty.

After a brief stop at Les Sablons d’Olonne, where we picked up Tom, we headed to Ile de Ré. It is larger still, with some amazing and beautiful harbours and villages, Italianate and Mediterranean in parts, and at this time of year heaving with Parisians, as it is joined to the mainland by a bridge. We enjoyed each island in different ways, and I’ll let the photos do the talking.

If you have young children, and want to turn them into French ones, just come here

After Ré we sailed under the bridge linking the island to the mainland, heading into La Rochelle. I had wanted to berth in the Vieux Port, but it was a bit crowded when we went in, so we opted for the huge Minimes marina, taking the solar-powered vedettes up the river and back. We also met our French friends Arnaud and Géraldine, who came with two of their sons for a cup of tea.

We had an early start from La Rochelle, to catch the tide down past the Ile d’Oléron and into the Gironde estuary. It was a fantastic eight hour sail, using a variety of sail combinations and using the engine just at the beginning and end. We found our way into Port Médoc, just at the mouth of the estuary, where Spellbinder will remain for a few days, as Sue and Tom fly back, and before Neil and Clare arrive. Here we have been royally looked after by old French friends Christophe and Virginie, and their daughter and grandchildren.

It was a great passage down the French west coast. Now for Spain…

2 thoughts on “Gosport to the Gironde” 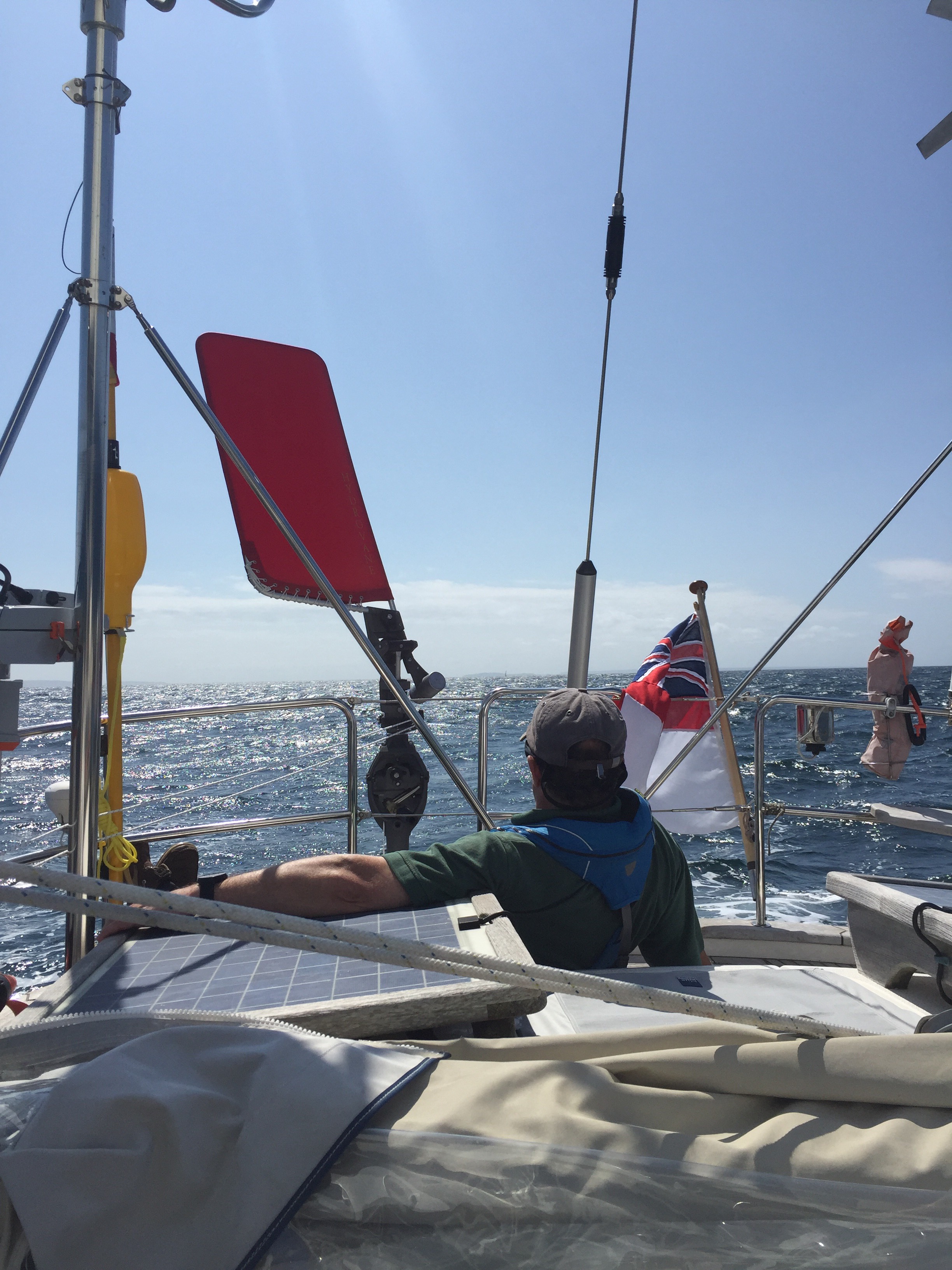 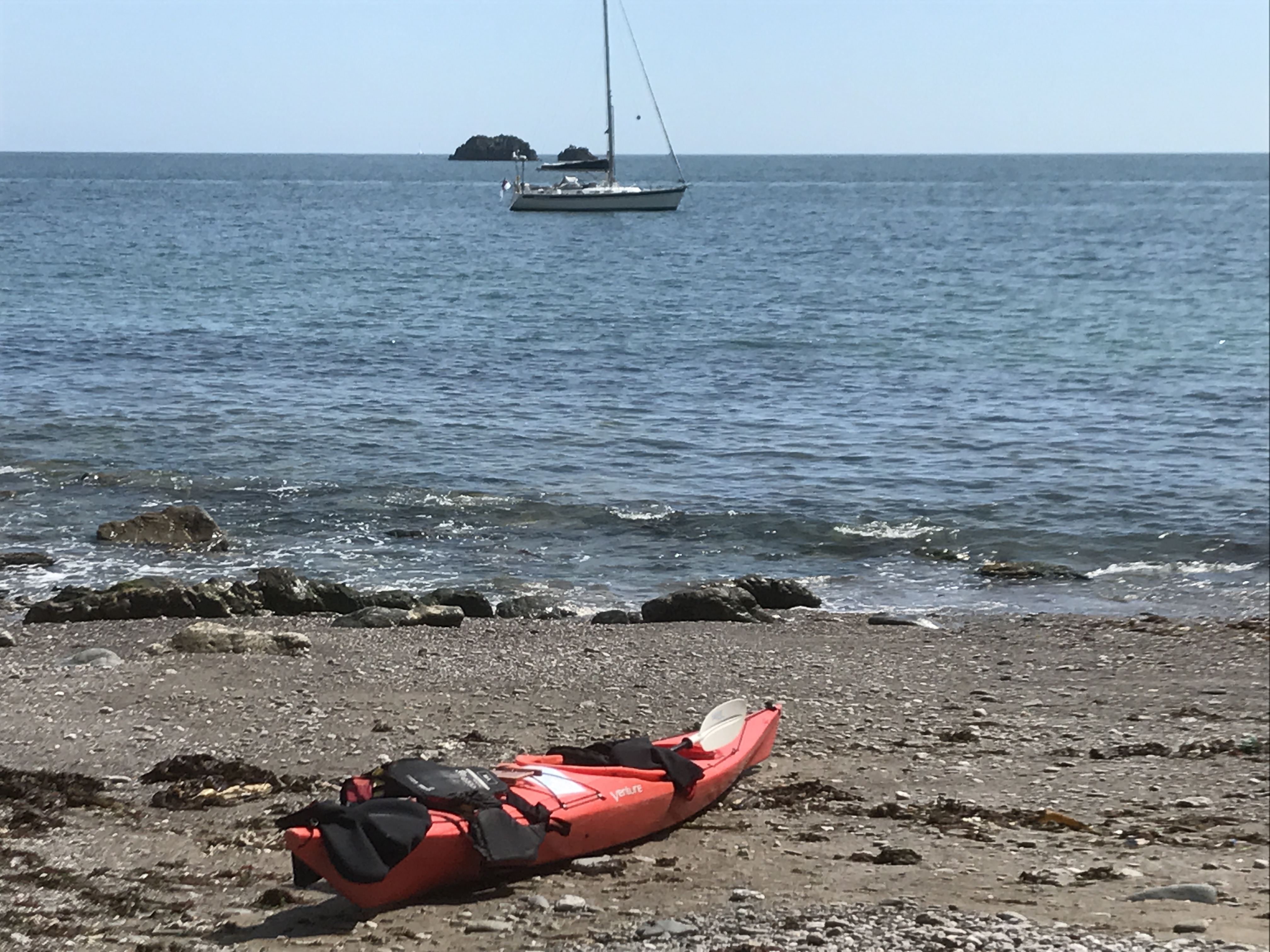 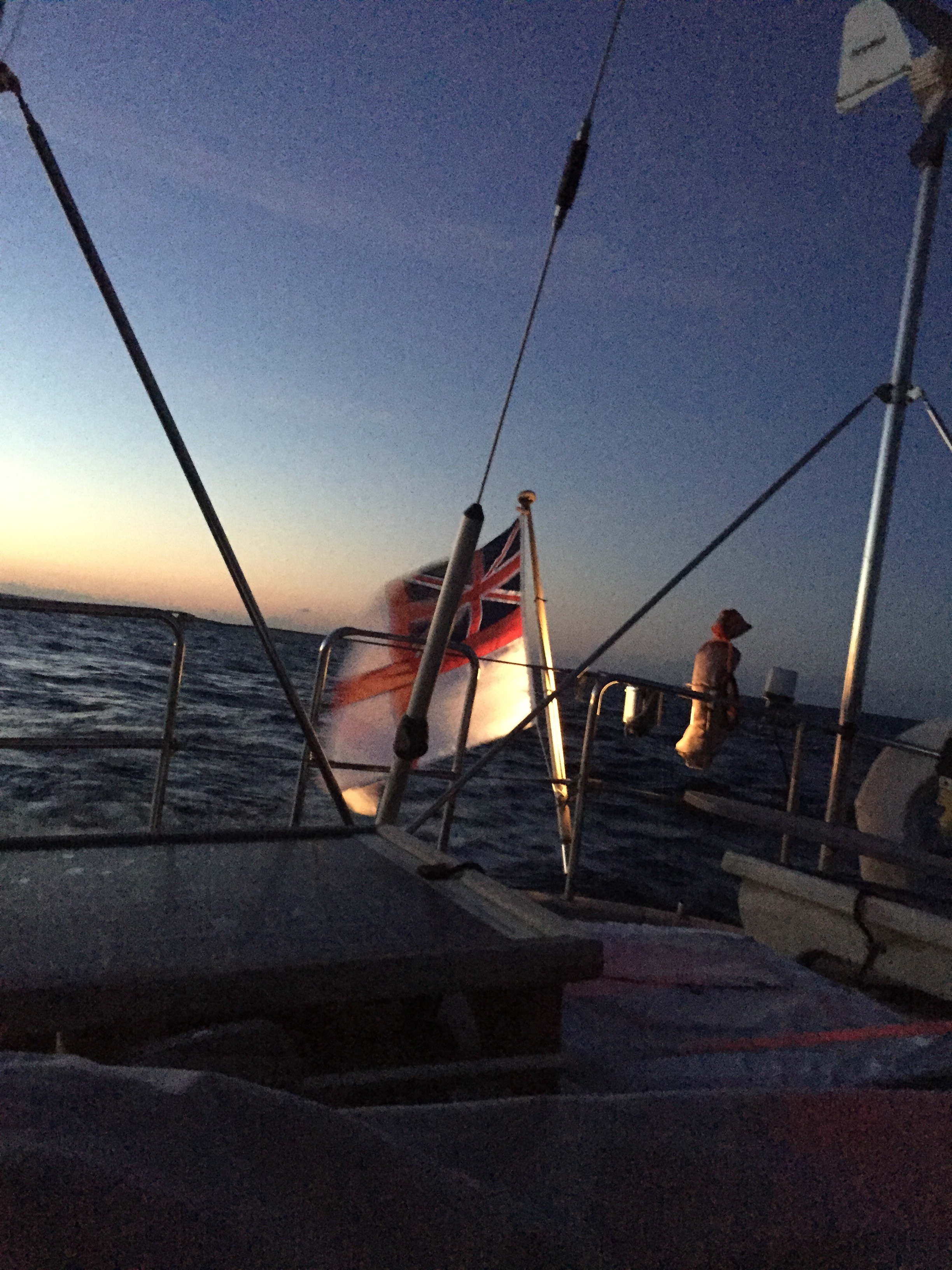 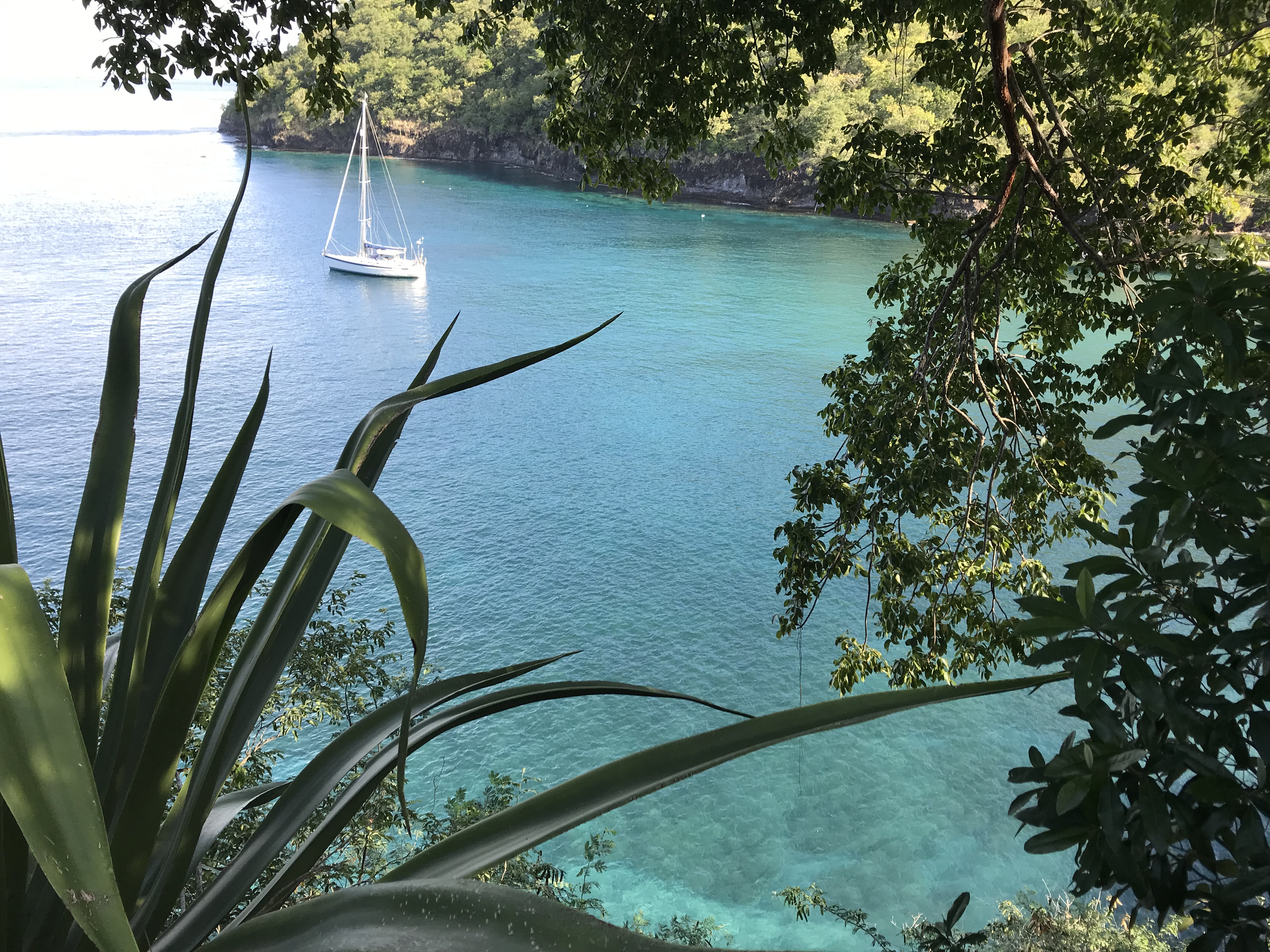